I have just finished watching The Shining yet again, probably for the 50th time. I love all of Stanley Kubrick’s films, but I feel particularly drawn to this one. And this has made me wonder, not for the first time, why do we enjoy horror films? They are, after all, deeply unpleasant and often downright nasty.

Given that humans like pleasure and dislike pain, we should, in theory, seek to consume stories about nice people who have lovely lives and are kind to each other and avoid anything to do with dark dangers, murderers, torture, and any other horrible stuff. Zombies, vampires, and vengeful spirits should, according to logic, be completely out of the question as vehicles for entertainment.

And yet, any standard list of films and TV series available on our home screens contains a large proportion of unspeakable horrors. I also include here other subgenres, such as stories on serial killers and violent dystopias, as well as the unfortunately ubiquitous depiction of sexual violence. 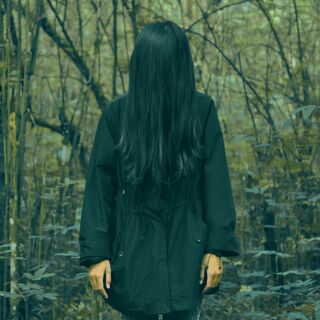 It is clear that fictional stories contain, and have always contained, large amounts of pathos, without which a story would feel anodyne and boring.

Stories are about tension and conflict, danger and threats, as much as they are about love and success.

They are meant to contain the whole mixture of emotions we encounter in our lives, sometimes simultaneously, because this is how we live our emotional lives.

We navigate different emotions every day, both negative and positive, and we never achieve a state of serene and stable inner bliss. So fiction replicates life to some extent, even in its most fantastic modalities, albeit in an amplified and compressed manner.

Therefore, it can be argued that for a narrative to be interesting and engaging, the story needs to include a certain amount of adversity and threats, not unlike those we may encounter in real life. But this still doesn’t explain why we enjoy proper horror stories, which assault our senses with their relentless undead, always determined to recruit the living into their ranks, and their creepy clowns, demons, poltergeist, and all the other forms of unimaginable horribleness.

It has been postulated that what we enjoy in these stories is the psychological arousal they induce, which is exciting, even if associated with fear, normally a very unpleasant emotion. Like in the case of a ride on a rollercoaster, we experience the fear and the excitement together, one inextricably tangled with the other, and the overall outcome is a rewarding experience, at least for some.

Others say that it is the final release of this tension at the end of each gruesome scene that triggers the psychological reward. Like in the rollercoaster, which induces only the illusion of an imminent crash, the potential unpleasantness of the fear in the horror film is contained by the knowledge that we are quite safe in the movie theater and the vampires won’t be able to bite us.

What do we fear in the haunted house, in the graveyard at night, or in the desolate hotel? After all, none of us has ever had a bad experience involving a ghost, simply because ghosts don’t exist. As for corpses, any living person is far more likely to harm us than even the creepiest looking cadaver.

What we fear in the ghost and the corpse is the embodiment of death–our own eventual death–and what we fear in the dark, desolate place–where an assailant can hide, and others aren’t present to help–is the risk of encountering that death. The unlimited evil of a sadistic demon unmotivated by normal human appetites is even scarier, however selfish these may be.

“I’m not afraid of death; I just don’t want to be there when it happens,” said Woody Allen. That’s the trick: watching the scary proxies of death from the safety of a sofa while holding a bag of popcorn—the thrill of the fear, without the risk.